I so wanted to write about this one!

28th December 2017 was the date we discussed “Getting Married” and initiated the discussion with our parents. He told me to give a good thought to this life-changing decision, while I was on my Dubai trip in January. I did, and it was a Yes.

We’ve been on “close friends” terms since a year before that, and have known each other since 2012. It’s obvious that getting married to one of your closest friends is always better than ending up with a guy or girl you don’t know!

This was a “mutually arranged marriage” scenario. We’re the first to coin the term. We arranged our own marriage, while parents agreed. We did not fall into the love at first, but took the decision based on logic and then fell in love!

In 2016, we were working in the same company and had the desk opposite to each other. We used to fight over song playlists, movies, made jokes and everything that colleagues do. But its rightly said “Zindagi mein kuch rishtey hum khud chunte hai … aur kuch rishtey Rabji hamare liye chunte hai.” Wink Wink Wink (Dialogue from the movie Rab Ne Banadi Jodi.” LOL!)

But no one ever thought Niharika & Vajrasar would end up together!

After my Dubai trip, we spoke to our parents about it and thought that this process would take somewhere around six-eight months. We expected resistance on their part. But we never knew that our parents were sitting with Aadhi Roti Pe Daal.

They got our Roka fixed, and we got “rokafied” on 22nd March 2018, and within a few days, they finalized the wedding date too which was 22nd February 2019.

Last year was super busy with all the wedding shopping, arrangements, etc. and I was waiting to share all the pictures with you all here! 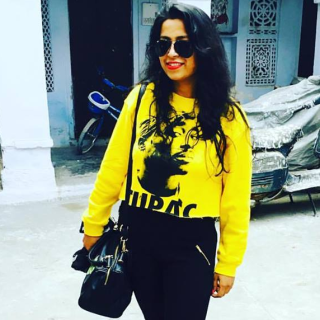